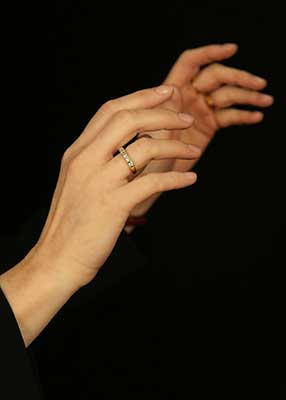 A vibrant musician and dynamic pedagogue, choirs under Dr. Heather J. Buchanan’s direction have consistently received glowing reviews for their performances. Her work with the opera chorus for Elmer Gantry (January 2008), a major ‘role’ in the production, received outstanding recognition in the New York Times and New Jersey Star-Ledger reviews: “The well-rehearsed student chorus sang with heartfelt conviction,” and “the student chorus was a marvel of diction, tuning and rhythm, but it also offered something else that’s harder to find in professionals; new-minted enthusiasm, vibrancy.” Music critic Don Delaney of The Times of Trenton wrote: “the hushed effect she achieved in the final words, ‘Dona nobis pacem,’ (Give us peace) was breathtaking.” The Berkshire Eagle review described her performance as “stunning… exceptional… mesmerizing. Conductor Heather J. Buchanan…with a wave of her expressive hands loosed an unbelievable palette of sound that coaxed tears from people’s eyes and then rattled their teeth!” In his review of Westminster Schola Cantorum’s World Premiere performance of O God, Why Have You Forsaken Us?, a commission by New jersey composer Joel Phillips, Paul Somers of Classical New Jersey stated: “One cannot imagine a better premier performance as the Schola sang with utter conviction and technical sureness.” On the same program, Mr. Somers’ assessment of the choir’s Finzi and Barber was clear: “…they are both downright gorgeous and were sung that way.”

In masterwork collaborations with the New Jersey Symphony Orchestra (NJSO), both the symphonic choir MSU Chorale and 60-voice MSU Singers have been praised for their professionalism, precision and nuanced singing. Of the Chorale’s 2014 Verdi Requiem under the baton of Mastro Jacques Lacombe, Ronni Reich (The New Jersey Star-Ledger) wrote: “The chorus’ rhythmic precision and clear articulation were especially valuable assets in the dynamic “Rex tremendae” leading into the pure-toned, beseeching words “salva me.” Also under Lacombe’s baton, Richard Carter (Examiner.com, April 2013) praised the MSU Singers for their ability to deliver “crisp attacks” immediately contrasting with “subtle” singing in softer passages of the Mozart Requiem. He further lauded “the entire ensemble including orchestra” for their capacity to present a “united whole in delivering the power and subtlety of Mozart’s sublime score.” In their 2010 Messa da Requiem (Verdi) with Maestro Neeme Järvi leading the NJSO, critic Ronni Reich of The New Jersey Star-Ledger astutely and succinctly acknowledged the relief and torment conveyed in Verdi’s epic score: “…in both, choral director Heather J. Buchanan drew performances of amazing clarity and control from the fresh-voiced Montclair State University Chorale… Their plaintive call of ‘Salva me’ – ‘Save me’ – which rose with ethereal grace and weightlessness, was especially affecting.” 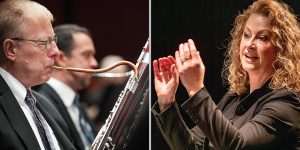 NJSO will be broadcasting the Montclair State University Singers performance of The Mozart Requiem from 2018, conducted by Xian Zhang. Viewers can enjoy the broadcast and then interact with guests and each other over Facebook chat! The link to the performance is included below.

This is a wonderful opportunity to celebrate accomplishments and stay connected through music! Hope to see you there!